A fabulous tour of Kemnay House 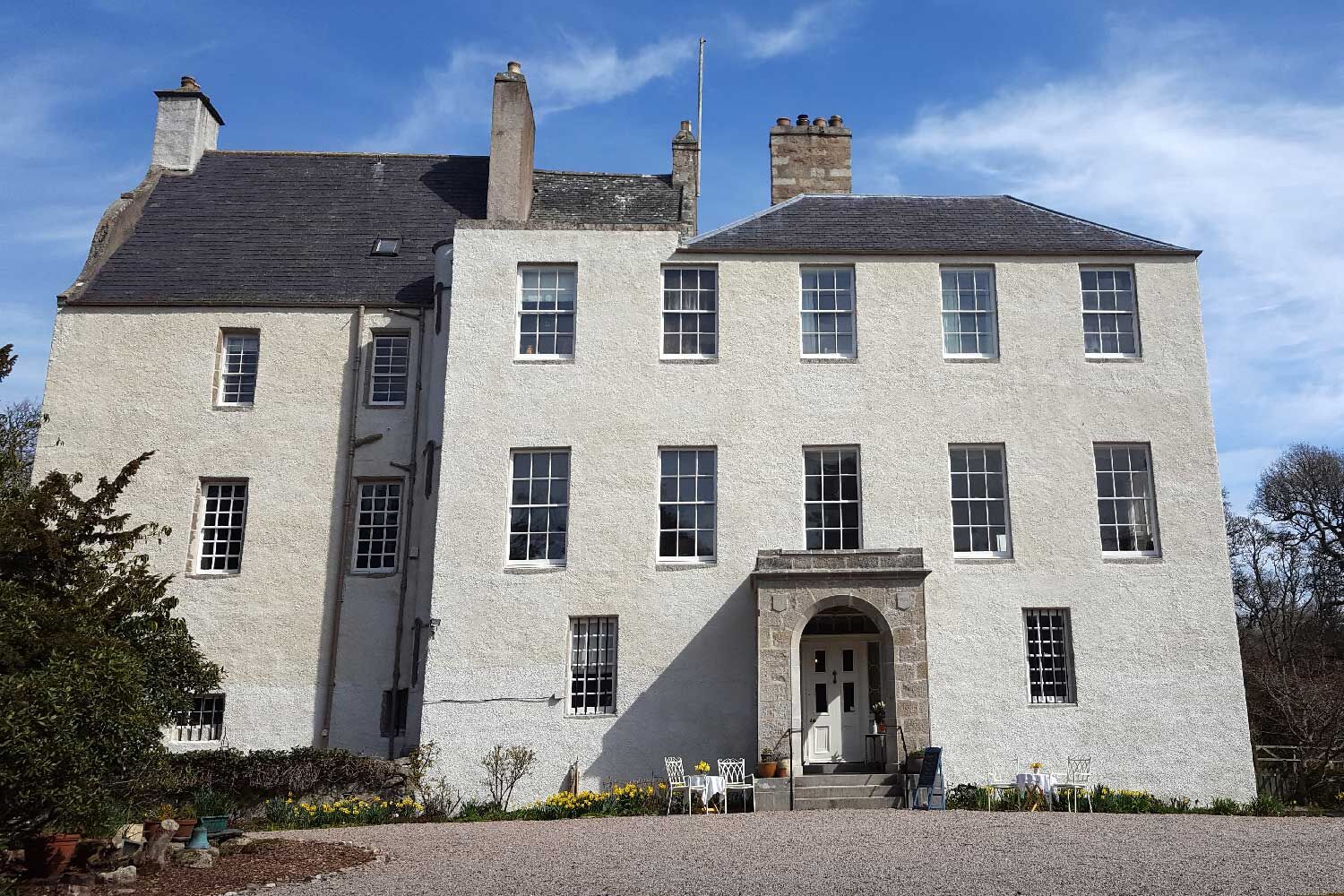 I have been living in this area for over 20 years and yet this is the first time ever I have taken part in a tour of Kemnay House which lies only two miles from my village. Set back a long way from the main road road that leads through Kemnay this historic home is not at all visible when passing by the entrance and unless advertising open days or the annual North East Open Studios, an Aberdeenshire showcase event for arts and crafts, you wouldn't necessarily notice the house is there.

Driving down the the straight treelined tarmac track, the shape of the house gradually emerges through a gateway of trees, shrubs and rhododendrons, not yet in full bloom in April. You get a good view of the turret and older part of the building when approaching from the parking area.

Kemnay House was built as a simple tower house and extended as an L-shaped building and courtyard in the 1630s. Since then the house has seen major changes and refurbishments to adapt to times and circumstances. The sign to the entrance takes you round to the right and leads to the new doorway which is featured in the photo.

Kemnay House has been the home of the Burnett family for 300 years and is currently occupied by two generations of Burnetts, Letitia and her daughter Alexandra who extended a very warm welcome when booking the tour. The house is open only at certain times of the year so keep an eye out on their website or social media if you wish to visit.

Our tour guides provided a fascinating insight into the history of the family members and their comings and goings, their ups and downs. What struck me was the international stage that some of them lived and worked on. Thomas 2nd Burnett enjoyed life at the court of Sophia Electress of Hanover where he made friends with leading philosophers and helped secure the succession of George 1 to the throne.
Alexander Burnett whose portrait is displayed over the fireplace in the dining room served as a secretary to the British Ambassador at the court of Frederick The Great in Berlin and fought in the Seven Year War before returning to Kemnay House in 1772.

Photo albums in the bedroom and other places feature faded sepia coloured pictures from expeditions and life in Africa and a picture of the first motor car in that particular area being driven by a family member in India, if I remember correctly.

There are a great many documents on display, copies of letters from different centuries , receipts, invoices, that provide a good sense of the life of the house and family. It's easy to look at portraits on the walls which are interesting but it can still be a distant and disconnected experience yet seeing a hand written letter or note to order a particular roll of wallpaper sample adds a much more personal dimension.

What made me swoon, as you might expect from a surface pattern designer, were the original wallpapers, the tapestries over the doors to keep out drafts, the fabrics, and especially in the sitting room laid out were a beautiful court waist coat worn by Alexander Burnett, an Empire dress worn by Elizabeth Burnett (1788-1806) and a Victorian bustle dress. The bedroom featured a stunning wedding dress. On display were also exquisite lace baby bonnets which the family had found, seemingly forgotten, in a box in the library of all places especially odd when this was the room gentlemen retired to after dinner.

The library is small but stunning with beautiful original patterned wallpaper and houses around 3000 volumes of books, the majority of which were published before 1850. It was one of the rooms created when the North East wing was being remodelled.

I love old books and I was struck particularly by one bookcase holding the ivory coloured collection of vellum bound books mostly in Latin purchased by Thomas Burnett 2nd of Kemnay and his father.
Fascinating too were the stacks of faded, frayed copies in the darker corners of the room leaning against the walls like tall, narrow chimneys, some evoking a medieval look the way they were stitchbound and tied together with ribbons.
I would love to spend time browsing through them, as with the letters and handwritten notes these books open a real connection and doorway to the past for me and my imagination.

Another highlight in the library was a map that featured an etching of Dunnottar Castle before it turned into a ruin.

I'm not so much into furniture however there are many beautiful items, including writing desks and a stunning intricate inlaid wooden Dutch tall freestanding clock at the top of the stairs and also this one in the middle. 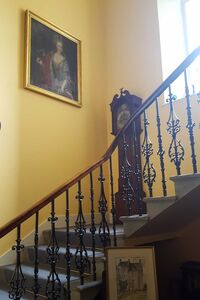 The tour concluded via the turret circular stair case and with the offer of a cup of tea and home made lemon drizzle cake in the panelled parlour which features beautiful decorative panels restored by Susan Burnett. For the past three generations artists have lived and worked here and it's great to see how the house is being utilised to connect past and present - it certainly worked for me.